This post follows my first visit to Bar San Francesco where I had the Tagliolini with Rosé sauce. Since that meal felt so basic, I had to give the restaurant another go. You can read about that experience here.

On this occasion, I tried the tagliolini pasta with smoked salmon. Yes, the same pasta type but it was my second choice and I wanted salmon. The sauce was going to be a creamy milk sauce.

While waiting for the dish to arrive, I was wondering how much salmon I would get for €6 and it turned out not to be a lot, as expected. Was I asking for too much? The dish itself was also a small portion, but I knew it would be filling; if there’s one thing I learned from dining in Italy, it’s that you will be full by the time you’re done eating. 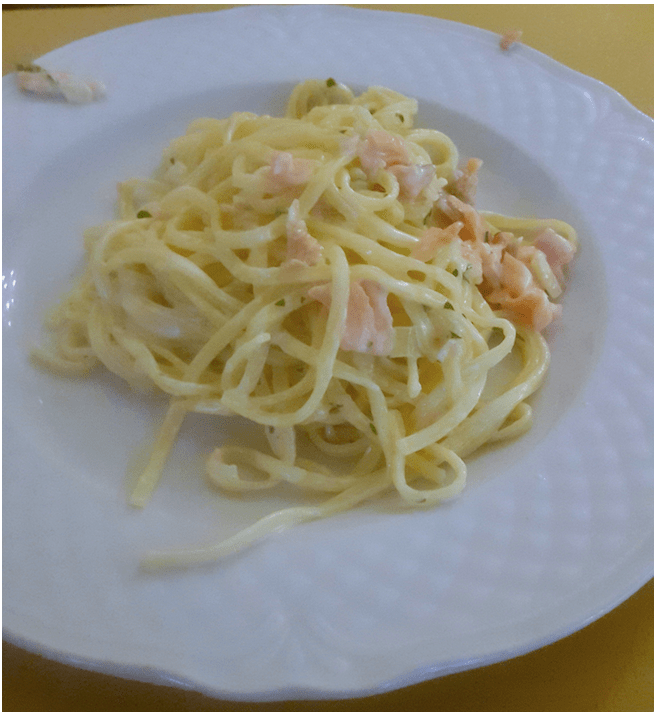 Alas, the pasta wasn’t very creamy but it was properly cooked. That al dente goodness. I want to be able to feel the slightly hard bite when I eat pasta. Don’t you?

Some more observations on this second visit led me to conclude that this restaurant is pretty popular with Uni students. It was also a bit more rowdy with some patrons standing and eating. Some people also brought their dogs into the restaurant which was a big no for me. And while I like the student deal in this restaurant, I think I prefer the vibe at Mokha.

For dessert, I opted for the 3 cookies option again. I found out that it also included the little pastries. Maybe I should have gotten the fruit chocolate tart… Anyway, I got two custard-filled puff pastries; one was dusted with sugar while the other had icing on top. The third ‘dessert’ was a foot-shaped, chocolate dipped cookie.

Final thoughts? I feel like the restaurant can be so much more, like it’s not living up to its potential. Would I go back, most likely. Their pasta is well-cooked!