Another day, another Melbourne brunch. If you know me well enough, you know that brunch is my jam! I mean you get to wake up late and still have breakfast food close to lunch! Win! Or breakfast food for lunch. Win! Win!!

The gang and I aka Lonely Islanders (I still don’t know why A named the group this) made plans to have brunch at The Crux & Co., a café I have on my list. This time around, it was located in Saint Kilda which meant a bit more travelling than normal. Nothing too out of the ordinary. Except on this Saturday, the weather forecast predicted showers for the day. And because we had to walk, we were at the mercy of the downpour. Good thing M and I had umbrellas.

Anyway, it took us so long to walk to Crux that A, not unsurprisingly, decided to rally everybody else against me if Crux was closed or wasn’t nice or whatever bad thing could happen. But Alhamdulillah, we got to Crux, we walked in and everyone said it looked good. (Chubbydija: Self Five!) 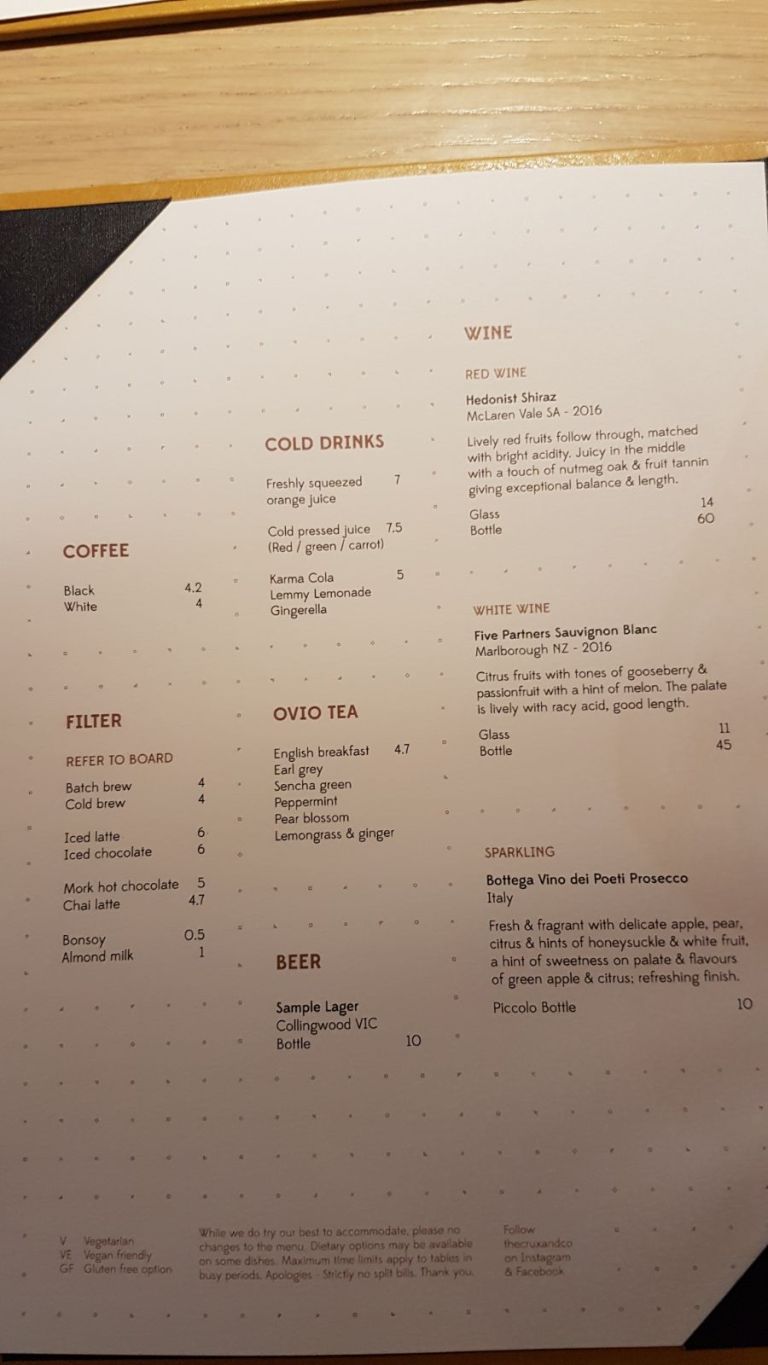 When we got to Crux, it took about five minutes tops to get a table. It wasn’t busy which, now that I think about it, was a bit weird for a Saturday. It could have also been because of the rain or the time that we got there. 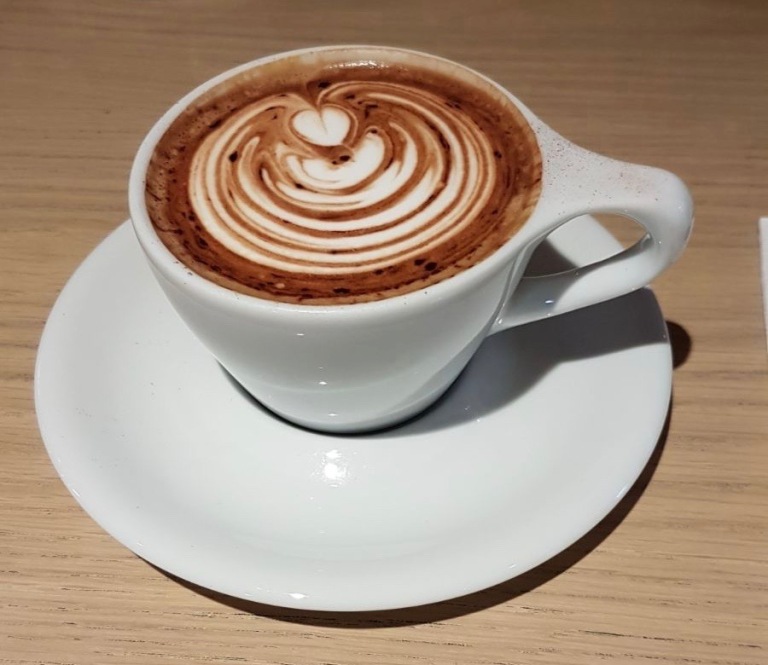 Anyway, going through the menu, I began to think that Crux had a Japanese influence. Going through their website though, I know that the influence is actually Korean. Also, it would appear that Crux is famous for its pastries but we were there to have brunch. (Chubbydija: I think that the original reason for having Crux on her list was for the pastries… Hmm.). 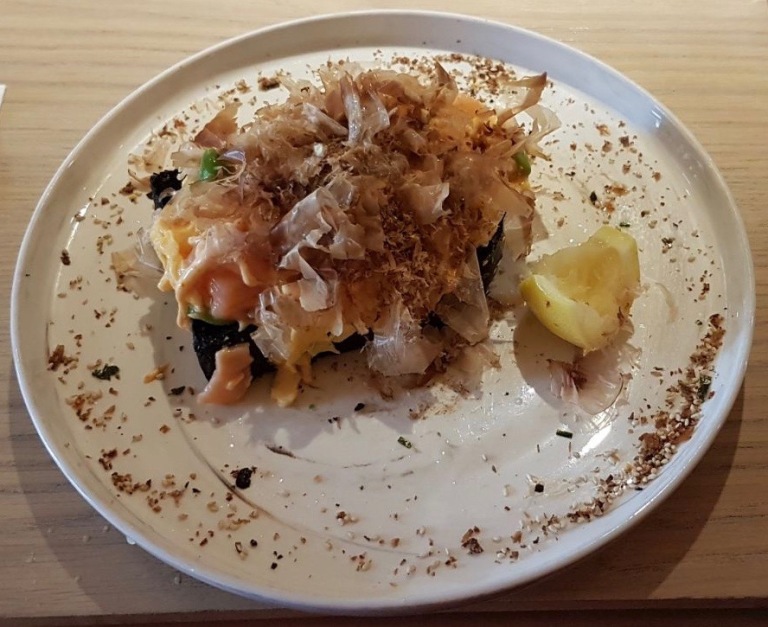 Unlike other times, it didn’t take me a long time to choose what I wanted. A pointed out that they had a mushroom burger and I went with it. I decided not to go the sweet brunch route because I have been accused of doing that every time I go out to brunch. But pancakes and hotcakes are the business though!

My order was the Mushroom burger which came with a matcha bun and sweet potato fries (good on you for Crux for including a side!), A’s dish was smoked salmon tossed through scrambled egg with tobiko mayo served on smoked charcoal toast and M had milky matcha pancakes with strawberry and lemon parfait and yuzu compote. 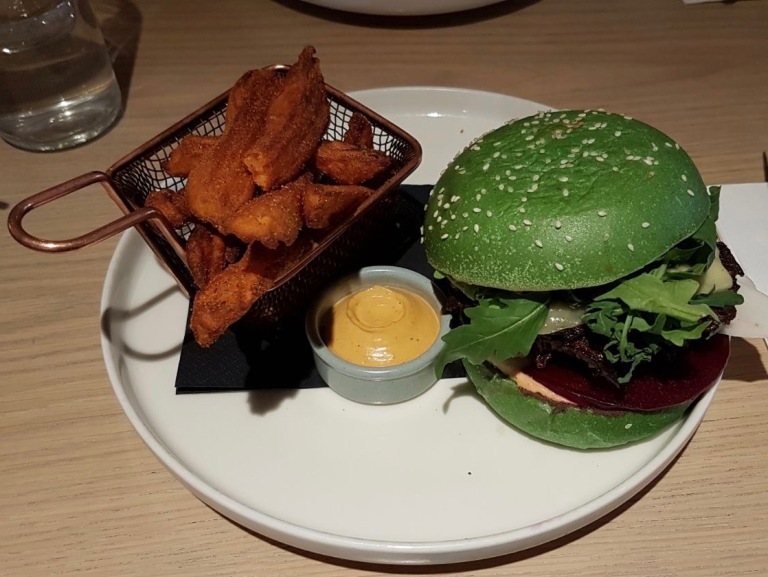 The matcha pancakes were so good. Fluffy. Creamy. Rich. I however felt like it could get tiring to eat due to its richness. But that bite I had was greeeat! 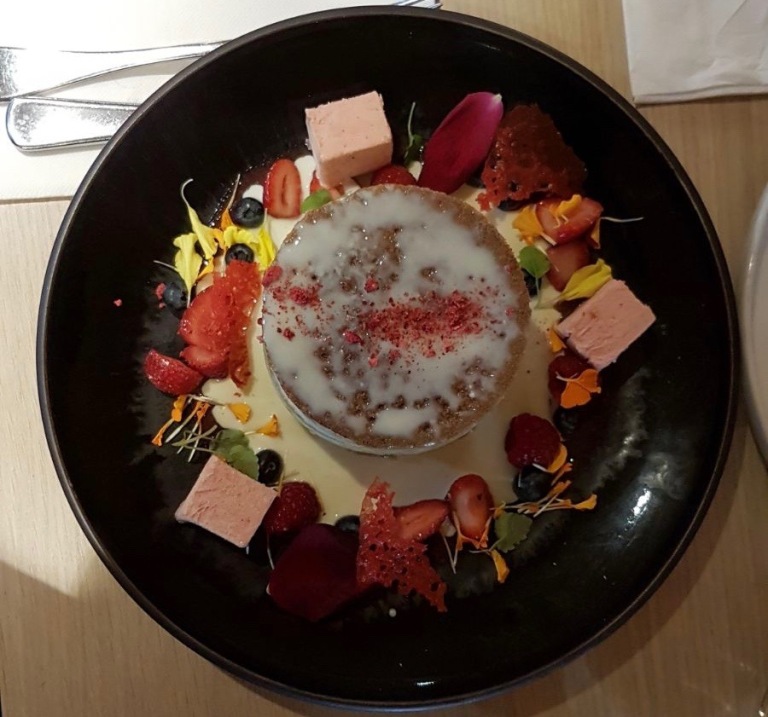 The sweet potato fries were soft on the inside, crispy outside. M and A thought the fries were good too, M particularly praised the seasoning on them. The dip was however a bit too fishy but nice with the fries.

A thought his meal was okay. I didn’t taste it.

As for my meal, it was really good. A shared my sentiments too. The veggies in the burger were nice and fresh. If you’re not a fan of beetroot, it may not be the burger for you. The only thing that didn’t taste ‘clean’ was the mushroom patty.  I was so full at the end that I couldn’t finish my fries, which is not the norm for me. I also have to add that the burger is very messy so ensure you’re comortable with whomever you’re eating with if you’re going to order it.

To drink, I got a mocha and a hot chocolate too, alongside my usual water.  The hot chocolate was really good. Unfortunately, I don’t have a picture of it. Sorry. 😀 My first hot chocolate order came with a marshmallow and I had to swap for A’s mocha so if you’re part of the halal fam, ask them to leave it out. You can also ask if it’s a veggie mallow.

I wouldn’t mind revisiting The Crux & Co. However, Melbourne has so many brunch places to offer so…