I’ve always wondered if cooks/chefs on tv lie about the taste of whatever it is they cook on their shows. I mean, not EVERY meal one makes is perfect. Even the ones we’re used to making.

I had been wanting to make apple turnovers (thank you Once Upon A Time) but the recipes kept calling for store bought refrigerated puff pastry which I wanted to avoid. As a result, I had to make a pie instead. As usual, I mostly eyeballed the recipes I referred to (cookinandshootin, allrecipes.com). I also did not use all the ingredients stated.

I used white flour and whole wheat flour for the apple pie crust. After I had prepared the dough, I realized I did not have a pan suitable to bake a pie in. Classic case of leaping before you look. Thankfully, my trusty mug was there to save the day. The mug made a good mould.

I refrigerated the apple pie and I must say that although it was slightly salty, it was delicious! The saltiness of the dough and the sweetness of the filling (which was also slightly salty) were in harmony. 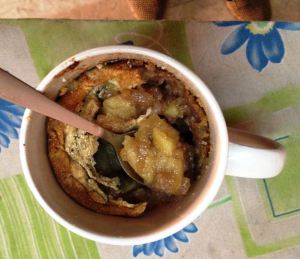 Since I made too much dough for the pie, I used what was left of it to make cookies. The bag that contained the whole-wheat flour came with a cookie recipe so I just followed that. I also added some semi sweet Van Houten chocolate (I think it was the baking chocolate).

The cookies were salty but the chocolate helped; chocolate and salt are obviously a good combination. They tasted better after I had refrigerated them. They were very good; hard outside, soft inside. They were also dry, but not in a bad way. I plan to make more of this!

Finally, my chin chin which was made with whole wheat flour.  The chin chin was soft all through. My friend said it tasted like biscuits. Nobody complained about the choice of flour used. Win!

The steps are shown below:

Compared to the previous chin chin batch that I’ve made, this batch has a slightly different colour and a very strong whole wheat flour presence similar to wheat bread.

The inspiration to make all these came at about 3 am! The things boredom can do! It’s never too late to cook I guess. 🙂

Any suggestions on what I should eat next?