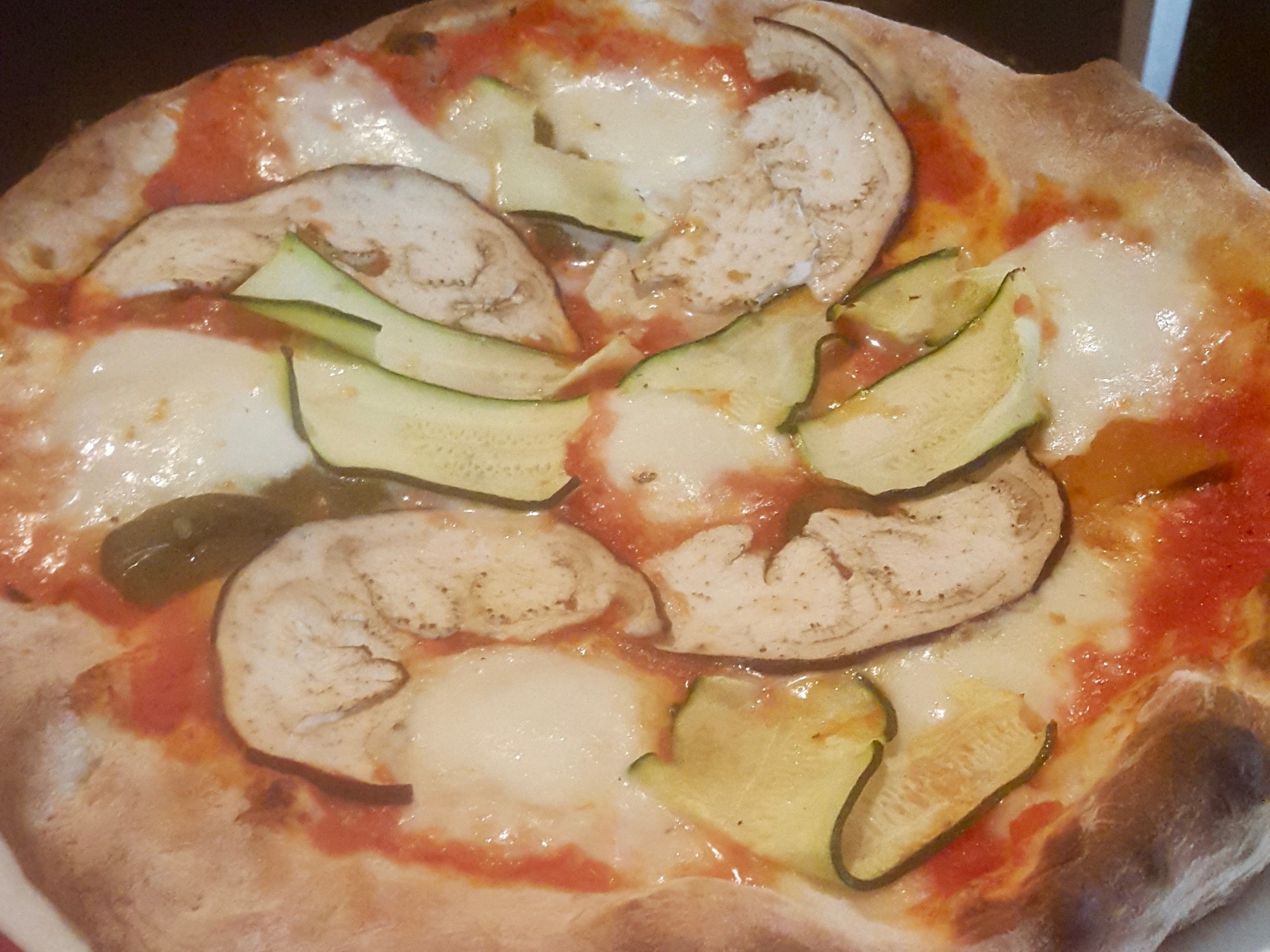 This post is another entry from Mokha where I had my first pasta dish in Italy. On Wednesdays, they serve pizza and I, of course, had to take advantage of the student discount.

They had four pizza options, with the famous margherita pizza among them. I would have liked to order it but when I mentioned ‘vegetarian’, which was another pizza option on the menu, the waitress just went with it and I didn’t object. While she was mentioning what the pizza would come with, she said ‘peperone’ and I immediately said no! How could pepperoni be vegetarian? Turns out that peperone is the Italian name for bell peppers. Hehehe.

Anyway, out came my single person pizza which was large enough for two people. It had tomato sauce, cheese, cucumber, bell peppers and what I think was eggplant. They also gave me a knife to cut it myself, which I liked (I wonder if this is done at other restaurants). After all the picture taking, I took a bite and…

Well, I think other pizzas have probably spoilt the taste of authentic pizzas for me, assuming this was an authentic pizza. I’m a fan of thin crust pizzas and this was one of those. However, it did not live up to my expectations. It tasted bland, and the cheese was probably the best thing on the dough. After adding some black pepper though, I was able to enjoy it better. I don’t know if the salt I added made much of a difference.

The pizza tasted okay the day after. I feel like the cheese also tasted better. I did not like the top part of the crust though; it tasted burnt and not in a good way.

On the positive side, our €6 discount also included dessert, despite the fact that I ordered pizza. I thought this was generous of the owner. I got the apple strudel and K, who I had lunch with, got the panna cotta.  The strudel was not memorable and I would have preferred if it was hot. The last bite of the strudel was good though, for some reason. The soufflé still reigns supreme at Mokha. K said the panna cotta was good too and I trust her judgement as it’s her favourite dessert.

Unfortunately, I forgot to take a picture of my strudel but K came to my rescue!

I hope you have followed ayamstuffed on Instagram! I update my stories with goodies on-the-go and you’ll be able to view them in real time!

You can enjoy an apple strudel at home by making it yourself. Click here for a simple recipe!