Being a huge fan of dessert (read: almost everything sweet or is a snack. I’ve a major sweet tooth), it was great that I was able to find a blog that has healthy dessert recipes. This blog is none other than Chocolate Covered Katie. I’m sure some of you might have heard of this blog. The brownies I make are designed after her recipes (I say designed because I mostly get the idea from her blog then eyeball the ingredient quantities and make the dessert to suit my taste).

Anyway, some time last week, I decided to make her chocolate marble swirl banana bread. However, due to the fact that I use a grill instead of an oven to bake, I usually end up with brownies when I try to make her cakes or bread. I added some left over almond pieces that I had and the spices I used were ginger and cinnamon. 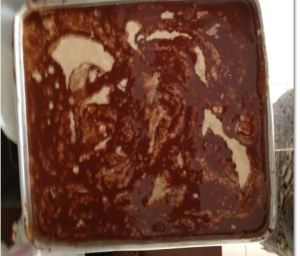 Compared to Ms. Katie’s mix, I think I may have over done the swirling. At least it’s not all chocolatey.

This was the final result. Nailed it! 😀 The brownies are hard on the outside but very soft on the inside. The bananas were over ripe so that helped sweeten the brownies. Now I have a healthy snack to munch on when I have a craving for something sweet, which is almost every time. Chubbydija.

On the same day, I made a Nigerian snack called ‘chin-chin’. For you non-Nigerians, the name might sound very peculiar. I do not know where or how this snack got its name! I had to check out Nigerian food blogs (All Nigerian Recipes, 9ja Foodie) the first time I made it (Got most of the details from the first website. You can check out the second blog for more pictures). This was my second attempt and I think I did a good job. 😀 The spices I used in this second attempt were cinnamon, nutmeg and ginger (the recipe as per All Nigerian Recipes only mentions nutmeg).

This is what the dough should look like after mixing all the ingredients. It should be stretchy and firm. You can then cut the the dough into any shape you want and fry. I had an ambitious plan to make the whole alphabet but so far I’ve only been able to make a letter ‘D’ for (chubby)Dija. 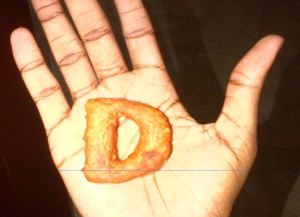 This letter ‘D’ was made in my first attempt. Second time around, I just cut the dough into squares and fried.

This was the final result! They are crunchy on the outside, soft on the inside (except the thin ones which are crunchy all the way through) and they are not too sweet! Yay!

Chin-chin should however be enjoyed in moderation as it is basically fried dough and is fattening. 😦

All Nigerian Recipes has a very good video documenting the whole process while 9ja Foodie has some nice pictures.

Have you been to my Instagram page lately? No? Well here you go. Enjoy! 🙂