Victorian suburbs and road names are funny and confusing. You might be trying to get to Ariadne Road so you enter it into Google Maps and select the first option. Unfortunately, you end up in the suburb of Hoppers Crossing when you were trying to get to Murrumbeena, which is at least 47 minutes away from your intended destination. I am mentioning this because Hobba is in Prahran but I had to use the Frankston train line and get off at Hawksburn Station and not the Sandringham train line to get off at Prahran Station. Reading this article though, it would appear Hawksburn is a “suburb that’s not a suburb” so, my route makes more sense.

It was also my first time in Hawksburn, and despite it being a weekend, it was very quiet.   There was a cafe opposite the station that looked like the kind of place you would visit on a lazy morning. But, I had an agenda, and after a few minutes of walking, I arrived at Hobba. 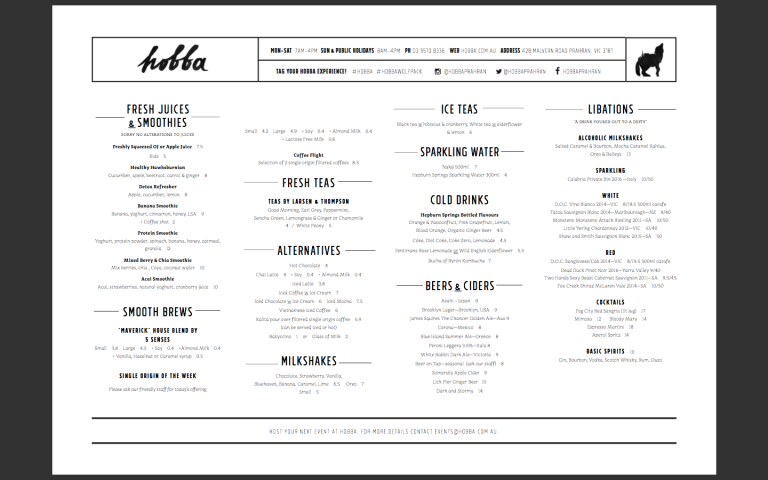 I wasn’t expecting Hobba. I mean the environment and vibe. Unlike most cafes, it was big, which meant a lot of diners. It was also pretty full, which meant that the food or service is good. I was greeted at the door by some guy that looked like he owned the place (he was probably the manager) who showed me to my seat, which wasn’t difficult for my lonesome.  After I sat down, I was able to take in a bit more of my environment which gave me jazz club vibes although it was about 1pm and most people were casually dressed. There was also a mixture of diners; old, young, families, and people on dates.

I just have to add that before I made my order, I got asked by three different people what I wanted. It was a bit excessive but not annoying. I guess waitresses aren’t allocated tables? Looking at the menu, I was once again robbed of a waffle trifecta as the menu didn’t indicate that they were vegetarian. I also wasn’t very impressed with the veggie options. The non-veggie stuff looked good though, there was some lamb thing on the menu that I thought would be good and I don’t even like lamb that much. Anyway, I got the Hobba hot cakes, and an iced latte just because. I am not a coffee drinker; not a fan and it does nothing for me really. However, I was feeling slightly tired that morning and was interested to see if it would wake me up.

After I ordered my hotcakes, I saw that they had fish tacos which I wouldn’t have minded ordering. It was $24 though, which was outside my budget so I guess that was that (Chubbydija: She usually can spend any amount on food but alas, she had to make a budget).

My latte arrived and I tried it. It was devoid of sugar. However, the first hit had me feeling slightly awake. To all you coffee lovers and drinkers, is that possible? And then, my food came out like 5 or 6 minutes after ordering it! That was very impressive. I don’t think I’ve ever gotten food from a cafe that fast before!

The hotcakes were good. They were served with citrus and vanilla mascarpone, honeycomb, maple syrup and strawberries. On their own, the hotcakes tasted like cakes. The mascarpone tasted like rose water which I liked, I suspect this was really the citrus. You could also see the vanilla seeds in the mascarpone, which is fancier. The honeycomb, as I suspected, stuck to my teeth. That’s what I don’t like about honeycomb.

The serving was a lot too, I hadn’t even gotten through the first hotcakes and I was full. Wahala. I think I got full early as a result of snacking beforehand. That said, I think they also know that the dish is a lot to get through. It might be worth sharing with others if you do visit.

Will I go back? I think so. Hobba is a nice place to dine with friends, go on a date or on your own. I would like to go back and have the hotcakes again or try the fish tacos.