Left Field is popular. I was reminded of it by R and it went on my list (not sure which came first). It’s also close to me, so it was pretty convenient. I got there sometime after 12 noon and was told that there would be a 10-15 minute wait which wasn’t bad. I was however hungry (Chubbydija: and sometimes her stomach gets really annoyed when she’s hungry). Looking around, I saw that the Left Field crowd comprised of families, with kids, and friends.

Shortly after waiting outside, a table for two became available and was offered to a family of 3 (with a kid). They however didn’t want it, so, it became mine. Yay. While waiting though, someone outside had asked me if I had been to the cafe before as he wanted to assess if it was good. I guess we both were going to form our opinions after eating because it was my first time too.

Unlike my usual cafe visits, I didn’t know what I was going to get at Left Field. Some of the sweet dishes had oats as an ingredient, and that isn’t my jam. There was also a pannacotta dish, which I wasn’t sure did not have gelatin, and a cookies and cream donut sliders dish, which I thought that was too much. In the end, I got the Cured Salmon nourish bowl with a whole bunch of veggies prepared in different ways (noodled, hummused, smashed, and just served fresh). 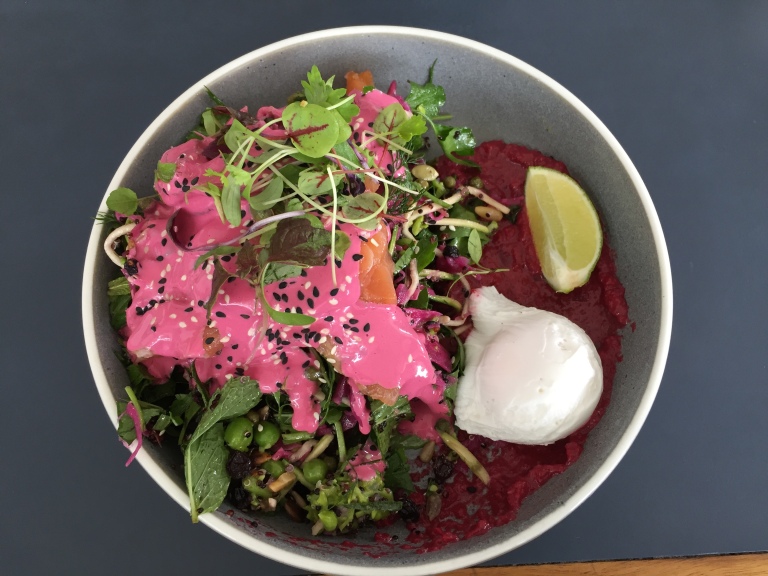 The order probably took about 6-10 minutes to arrive, which was good. Just looking at it, I wasn’t very impressed with all the veggies as it felt like there was more of that than the salmon. It also came with a poached egg which I didn’t remember reading in the list of ingredients (I like my eggs mostly cooked so I wasn’t going to be eating it). It was a pretty dish though. And a greeeat tasting salad. Crunchy, fragrant, lemony, fresh. It really felt like I was nourishing myself. The salmon added a salty flavour to the (slightly) sweet and savoury flavours of the dish. In hindsight, the serving of salmon was just right. This was a salad that I would love to recreate at home.

I just have to go back to how popular this place is. While I was eating, there were still people waiting to get tables. And this was close to 1pm. Would I go back? I think there are cookie and cream donut sliders with my name on them.