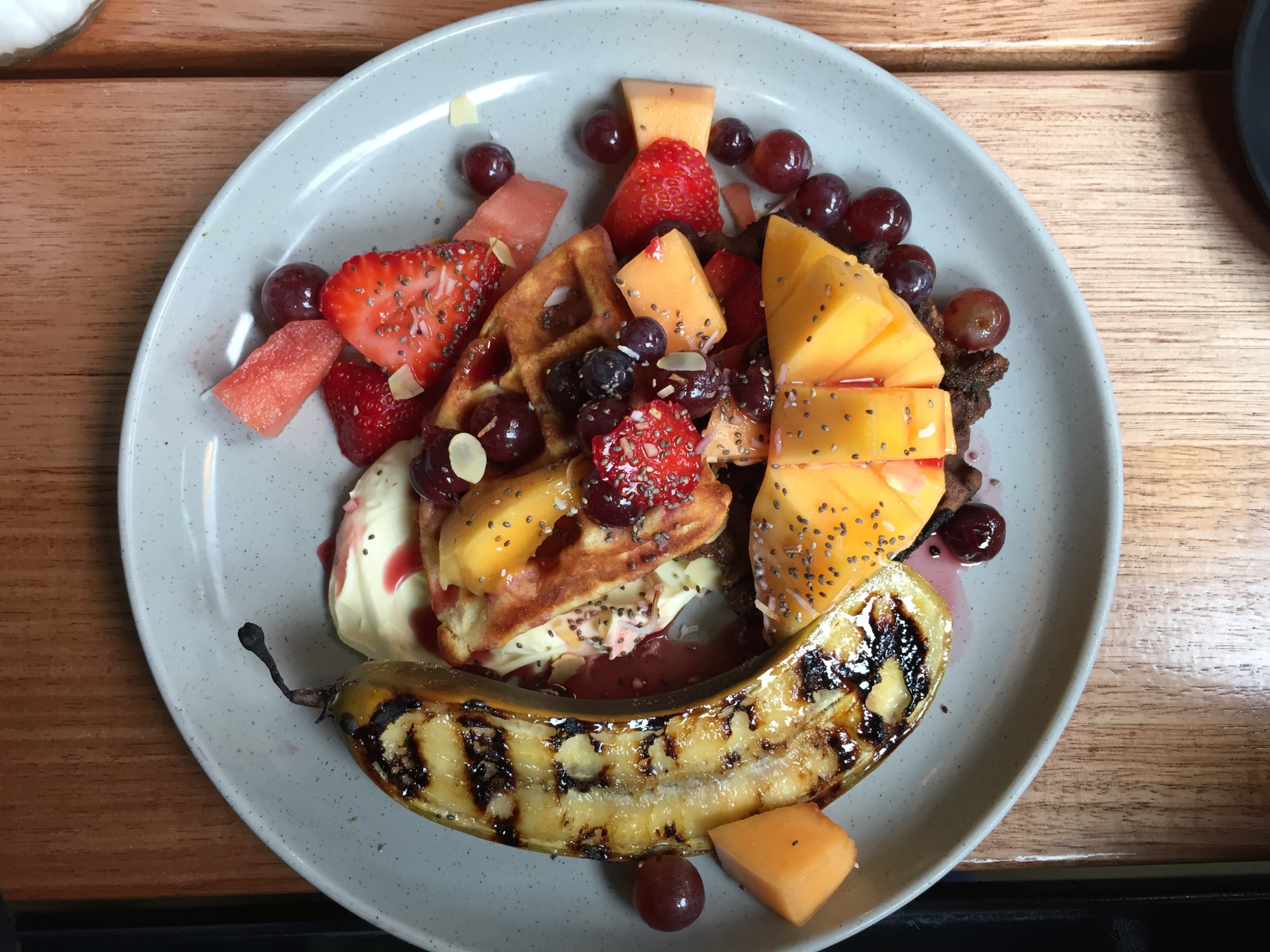 I visited Dear Liza on a rainy day. It was one of my Instagram-famous finds, and I expected it to be busy. However, there were only three other diners when I got there (excluding staff who were probably on a break). Maybe Melburnians decided to stay home to avoid the wet streets? Anyway, for ayamstuffed, the blogging must continue.

There was no one at the entrance when I walked in, which was confusing as I wasn’t sure if I could just take a seat or I had to order first at the bar. The Waitress at the Bar then appeared and told me I could take a seat. I chose a table in the back next to some plants, which may have been a bad idea. The Waitress at the Bar then came up to me, explained their specials, and gave me a bit of a run through of the menu after I asked for the vegetarian options.

I decided to go the sweet brunch route and order waffles. I got the Feeling Fruity waffles, with both the Triple Chocolate and Belgian waffles. I was drawn to Feeling Fruity because it had nuts and fruits, which reminded me of muesli/granola (I love me my muesli/granola). When I asked The Second Waitress what she would suggest re: waffle choice, she seemed a bit impatient and wasn’t very helpful. She then later said she liked both, which may have been an attempt to be more accommodating. Anyway, for my vegan and gluten free people, they also serve a potato waffle which is vegan and gluten free. To drink, I got the House Hot Chocolate, without the marshmallow.

After making my order, I got a chance to enjoy Dear Liza’s vibe which is pretty chill. They have quite a few plants on the walls, the roof and on the tables. Real plants too.

It also took quite a while to get my order but it smelled so good when it came out. What I liked about this waffle dish was that it wasn’t sweeeet. The sweetest elements of the dish were the fruits, especially the banana. It actually felt like a healthy meal despite being waffle based. The mascarpone paired really well with the Belgian waffle but not with the triple chocolate one. On the downside, I didn’t get the muesli/granola vibe I was expecting. There was basically just a sprinkling of nuts which weren’t memorable. I would have also liked to have more of the cherry sauce.

Anyway, this brunch was definitely much healthier than other sweet brunches I’ve had. Looking at the menu again, I saw that they gave me a caramelised banana even though it wasn’t listed as an ingredient! Thanks Chef!

Will I go back? I don’t think so. Dear Liza isn’t bad but Melbourne has other cafes for me to explore! And re: bad idea I mentioned earlier, maybe don’t sit by the plants as I spent some of my time shooing fruit and house flies away. Not what you want to be doing while eating.

Chicken bao from @thethirdtier_
@maryeatscake High Tea delivery. I got this before we were allowed to go out but I’m not mad because of the convenience. Also, it was delivered on a Sunday!
Loading Comments...
Comment
×
%d bloggers like this: